Welcome to a FREE service for the www.tintagelweb.co.uk Web site. Use this page for discussions, questions but please use the page sensibly. ENJOY!!

Hi,
Just to let you all know that Steven Morris,journalist with The Guardian,contacted me last week as a result of Tintagelweb, for info about Ocean Cove,and his story was published in yesterday's (23rd Oct)Guardian regarding Ocean Cove,Haulfryn, and the yuppie trend in North Cornwall.
I had a postcard showing the site in the 1950's and later in the 1980's etc, the article can be seen online, but the photos only appear in the paper, so I am now trying to find a copy of yesterday's Guardian to see what was actually printed.
Let's see what happens now!
Byeeeeeeeeeeeee
Jan

Hey we're famous! I was contacted by the journalist too but I didn't reply - he still used my post from this forum though!

I was back in Tintagel a few weeks ago at the begining of September - I passed by Ocean Cove on my way to Boscastle - there is nothing much to see from the road, just bare ground. Of course the famous Ocean Cove Arch has long gone - there was something magical about it when I was a child - you knew the holiday had started when you saw it.

I still like caravan holidays, and I've just booked a week in the Lizard in one next year. It's a site I been to before - I did try to find somewhere new to go but there does seem to be a lot less around in Cornwall.

I am sorry the lady misses ocean cove caravans, there are more caravans to let in Tintagel. For myself and the other residents of Bossiney Road, the last 2 years have been bliss. No more drunks shouting swearing, and urinating on their way back to ocean cove at anything up to 3 in the morning. No more yobs taking their clothes off and running about in the old peoples gardens, trampling their much loved flowers and shrubs and frightening them so much they were too scared to go to bed, then clearing off before the police arrive.

Hi,
Just to let you all know that Steven Morris,journalist with The Guardian,contacted me last week as a result of Tintagelweb, for info about Ocean Cove,and his story was published in yesterday's (23rd Oct)Guardian regarding Ocean Cove,Haulfryn, and the yuppie trend in North Cornwall.
I had a postcard showing the site in the 1950's and later in the 1980's etc, the article can be seen online, but the photos only appear in the paper, so I am now trying to find a copy of yesterday's Guardian to see what was actually printed.
Let's see what happens now!
Byeeeeeeeeeeeee
Jan

Hi Michael,
I am sorry if that is your experience of Ocean Cove, but it is not something that I recognise at all!
My own parents knew Mr. Mrs Record & family, from when they first started up the site in the 1950's, and we know how hard they all worked to create a good family atmosphere on the site, and create a business that generated work and income for other traders in the vicinity, when North Cornwall did not enjoy the popularity that it does now!
The site was always well run, and appreciated for not being like a Butlin's fairground!
The majority of the vistors just appreciated the sheer beauty and the wildness of the area. We didn't seek the razzamatazz!
Various members of my family have stayed in Bossiney,Tintagel, Boscastle, either camping or in Ocean Cove, almost every year since the late 1950's, at the start of the season, sometimes during August, but mainly September/October, and I can honestly say that none of us have ever witnessed the behaviour that you describe.
If it was like that we would never have returned so frequently. It is precisely because we enjoy the peace and quiet, and the stunning views,that Ocean Cove was so appealing. And although there other sites in the area, they are too crowded, too noisy, or devoid of views!
I hope that your last two years of peace, aren't shattered by the antics of the yuppie second home owners, because they can generate as much delinquent behaviour as anyone else, but unfortunately for the traders of Tintagel, I very much doubt whether they will generate much in the way of business to replace what has been lost!

I can say in all the times I stayed at Ocean Cove, that I never experienced the behaviour experienced by the other poster. No doubt the perpetrators have moved on and are disrupting life in another village.

Anyway, I think this thread is about the loss of a much loved holiday destination and the worrying trend of losing these finite resources to developers to sell to a handful of people. Tourism accounts for 25% of Cornwall's income so what happens when those tourists are priced out and have nowhere to stay?

So back to memories – In my original post last year, I recalled the luxury of the bottom field in the 1960s. Well I’ve located a little picture to illustrate this and hopefully you can see it below. It shows my father and grandfather collecting water the only was you could back then!

Hi Kevin,
Love the photo, glad that you have such good memories, I am amazed at the comments made by Michael South. I don't know if it was just a few isolated incidents at one particular time, but as I said the regular visitors who enjoyed the family atmosphere would not have kept returning year upon year.
But it just goes to show that one particular comment could blight the good reputation that the place has always had!
Regards
Jan

Hi all, haven't been able to come on and post here as I was on a different computer for a while but been following this all the same.
Did anyone get contacted by a Jonathon Cramp from Westcountry news? I had an email requesting if I'd like to do an interview regarding the closure of Ocean Cove as there was going to be a programme made. I spoke to him over the telephone and gave my views and I assumed that he'd be contacting everyone else from this board but not read anything.

Jan, I hope you had my email the other week as I didn't hear back.

Sarah asked:Did anyone get contacted by a Jonathon Cramp from Westcountry news?

I did receive an e-mail from him, but never got around to replying - Does any one know if the article was ever aired?

My father has been digging though his files and has located a Tintagel Guide Brouchure from the 1950's. It was produced by the parish council and is full of information and photos of the area. It also contains many adverts from the local businesses. Amongst them, is this advert from Ocean Cove. Judging by the number of caravans in the picture, they couldn’t have been running that long. 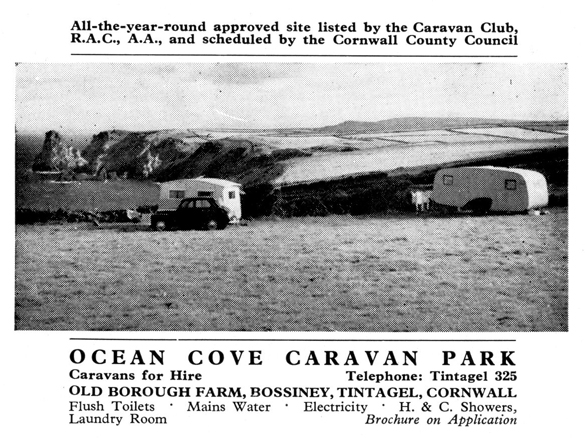 The brochure is about 56 pages and I plan to scan it into a PDF document. I’d be happy to send a copy to anyone who’d like one.

Hi Kevin,
Yes, I would love to have a copy of the brochure, the site was started up in the 1950's don't know exact date, but started off with 2 caravans. I'll try to contact Alan as he did keep all the records of the site, had his office full of them, but may have got rid of everything when they sold up.
I did n't get contacted by Jonathon Cramp, so no idea if article was ever done, perhaps we can find him and ask?

I've just checked and still have the email from Jonathan so will get in touch and if there's any news I shall post it here.

If possible Kevin, I would be interested in having a copy of the brochure too.

I would love a copy of the document you have. My family first came to Oceancove when i was about 4yrs old. We have had many a family holiday here. I then brought my then to be husband and even though it rained for 11 days out of 14, he loved the place. We then started to bring our 3 children here in the ninties and had brillient holidays they will always cherish. Two other friends and their families started comming down with us, we all had caravns next to each other and had loads of fun. We were all devastated when we knew what was going on at oceancove..i went to take a look last year and we drove round the park and i wish i hadn't it was so sad to see..end of an era. no more tow bar!Friends that we made and our children made we would not see again.
I have never seen any of the behaviour described and we always came in the height of the season.
will the yuppies appreciate it like we all did?

Email
« back
Return to Website  > Index
Free Forum&nbsppowered by Bravenet